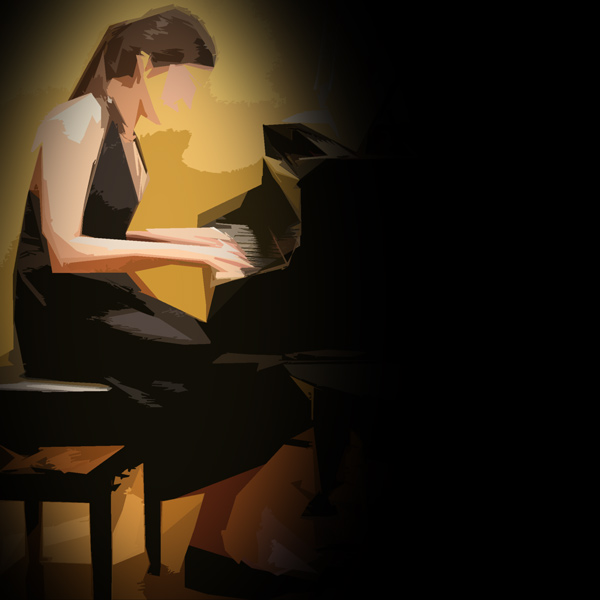 Safe in Sound is a musical play following the tour of gothic rock goddess Elli Ligh, an emotional cripple who pours her heart and soul into her music, but who is unable to translate these emotions into her real life.

The play begins in Amsterdam, where a concert is about to begin. Thousands of screaming fans welcome the “Dark Star” Elli Ligh to the stage as she performs her hit song, “Safe in Sound.”

After the show, Elli is joined backstage by her manager and sometimes-lover, Jason. Jason is a kindhearted man who first discovered Elli and joined her as she quickly rose to the top of the music industry. As the two leave the theater, Elli’s many fans call out for attention, but Elli does not acknowledge their presence in any way. It is not long before we realize that there is an incredible discrepancy between Elli’s music and her personality. Her music is profound, expressive, and beautiful – yet Elli remains bitter, shut-off, and even cruel.

Elli’s sarcastic and detached demeanor threatens to destroy her relationship with Jason, who clings to the belief that there is more to Elli than she is willing or able to show. For in her beautiful music lies a beautiful soul, pleading to be saved from a mind and a past that are clouded by darkness.

Safe in Sound is unique among my musical projects in that it is not a musical, but rather a play with music. By this I mean that there is no sung dialogue, random breaking out into song – in short, none of the elements that are responsible for many a distaste for musical theater. In Safe in Sound, the only songs that the audience hears are the songs that Elli performs in concert during the course of the play. These songs are critical to the plot, in that their purpose is to ensure that the audience has access to the parts of Elli’s personality that would never be evident from her everyday words and actions.

This formula gave me a lot of freedom in creating whole, unbroken rock songs for the stage. It also gave me an interesting challenge. In musical theater, one has to write for the specific voices of a character, and capture their speech patterns and personalities in song. But in Safe in Sound, Elli has “written” all this original music herself. The challenge then became to write songs that weren’t how a character would speak, but to write songs on behalf of a character who writes songs. It was a unique process, and one that has left me mildly schizophrenic. (Just kidding.) (Probably.)

There are many bands that I drew on for inspiration to write this kind of music, but I am most grateful to the band Evanescence, who served as my first introduction to the raw and honest sound and experience of gothic rock. The poetry, passion, and honesty that Amy Lee brings to every song she has given me so much, personally well as artistically. That said, I want to be absolutely clear that the character of Elli is not based on Amy, or for that matter based on anyone anyone. She is a complete fabrication built on an extreme manifestation of the premise that artists are often very different in real life than the music they create would have you believe. For Elli, that has some pretty drastic and extremely negative implications – and with good reason, based on the personal history that I created for her. So while I would feel remiss if I didn’t thank Evanescence for inspiring me to explore and create this genre of music, I would never want anyone to get the mistaken impression that Elli is a reflection of any real person.

(I actually recently had the opportunity to meet Amy Lee, and to my true delight and humility, she was literally the exact opposite of the character I created for this play. I’ve been very lucky in the sense that I’ve gotten to meet nearly all of my heroes over the years, and while they have been overwhelmingly positive experiences, Amy truly blew me away with her deep and genuine caring, and her ability to exist entirely present in the moment with her fans. I will carry that memory with me forever, and am so grateful to Amy for inspiring me with her music and her kind actions.)

In developing Safe in Sound, I owe a lot of thanks to Dana Gitlin, whose beautiful voice can be heard in the recordings on the sidebar. Dana is among the most talented artists I have ever had the privilege to collaborate with, and her many insights and abilities have allowed me to develop this music in ways that would not have been possible alone. Dana and I are currently prepping to re-record the full soundtrack with full instrumentation, so stay tuned for our upcoming EP album featuring the music of Safe in Sound!

The play begins in Amsterdam, where a concert is about to begin. Thousands of screaming fans welcome the “Dark Star” Elli Ligh to the stage as she performs her hit song, “Safe in Sound.”
ELLI
I’ve been wishing on the mem’ry of a star
Fallen angels have a way of falling way too far
I’ve been living off a single drop of water
And I don’t know how to taste it anymore
I’ve been waiting for the distance of the day
Haunting melodies are all that haven’t let me slip away
Fates have flown
Silent wisps of song embrace me
Now that I’m alone

Did I run too far?
Did I stand too near?
Did I lose my way?
Will I disappear?
Though I turned to you
You have turned around
So I’m on my own
But I’m safe in sound

Hear the laughter in the whispers of the stream
I’ve been dreaming for so long – I’m nothing but a dream
So I wander, though I don’t know where I’m going
As I fall beneath the surface of the fear
Within the silence of my scream

Did I run too far?
Did I stand too near?
Did I lose my way?
Will I disappear?
To have touched the sky
To have struck the ground
If I close my eyes
Then I’m safe in sound

All is lost
Stranded here
Take my hand
Turn around
You and I will be safe in sound.

Elli has just learned that her mother, whom she has not spoken to in thirteen years, is fatally ill. Although Jason tries to get Elli to speak about this, Elli appears disinterested, and goes onstage to perform her soundcheck.

ELLI
Dear little child
Where do you run?
Where is the home you’re from?
Innocent child
Fly toward the dawn
Soon the night will come

Michael is currently re-orchestrating Safe in Sound for an EP album to be released on iTunes, featuring Dana Gitlin as Elli Ligh. Check back soon for more info!