For Michael, activism for chronic illness goes far beyond writing musical parodies about food allergies (although that certainly is a fun part of it). Working through dramatic and literary art, and as the founder and facilitator of the Philadelphia Ehlers-Danlos Syndrome and/or POTS Support Group, Michael has two goals:

• To bring global awareness of the massive numbers of people suffering from
chronic, and often “invisible” illnesses.

• To provide chronically ill patients with a cathartic means to manage their illnesses,
and to help them build a philosophy that allows them to live full and rich lives.

What exactly is this philosophy? Click the “Live Because” tab above to find out.

“I’m not saying everything happens for a reason. It’s more like – you make a reason. You don’t live despite your problems – you live because of them. You use them to make you stronger. To make others stronger.”
-“Melanie” in Fresh! A New Musical

“Live Because” is a philosophy which embodies the idea that people experiencing monumental struggles can still live rich, full lives. These lives are led not only possible despite our problems – but with certain mindsets, we can actually live better lives because of our problems than we could ever have done without them.

For Michael, this philosophy isn’t just theoretical – it is intensely personal. In 2003, Michael completed his very first song, “A Perfect World,” in response to chronic health symptoms that were eventually diagnosed as the connective tissue disorder Ehlers-Danlos syndrome. Since then, Michael has made chronic illnesses the focus of nearly all of his dramatic works – works that could never have existed without the challenges he has endured.

In 2013, The Stanford Medical Journal’s SCOPE project featured “Live Because” in their monthly Experts by Experience column. In addition to this article, Michael is currently writing a full-length book: Live Because: The Philosophy of the Broken, and the Journey Toward Wholeness.

To those in need of healing,
Who can never quite be healed:
May curses be your blessing,
And may weakness be your shield.

To feel despite the numbness,
And to hear the silent sound.
To see there still is meaning
When no answers can be found.

I hope you’ll keep on searching,
While you also search no more.
For know that sometimes healing
Is far different and
far purer and
far greater
than a cure.

Featured in Without End: A full-length drama
© Michael Bihovsky, 2014

In addition to his advocacy work on stage, Michael has also written articles for the Stanford Medical Journal’s “Experts by Experience” column. Please read the articles below:

Since 2006, Michael has directed, produced, and performed in benefit concerts to support a number of organizations. Here are some of the causes and charities nearest to Michael’s heart, and which he hopes you will look into and support, too: 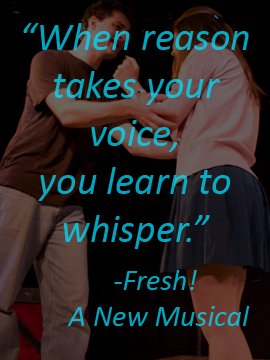