I for one am totally behind Sheriff Joe’s (actual) court defense for continuing illegal racial profiling despite a court order to stop. Why would a sheriff know that he has to obey a court order? It’s not like he works in law enforcement!

So I’m glad he can walk the streets now, as gratitude for the fact that, in Trump’s words, he “kept Arizona safe!” …well, except for the masses of Hispanic-Americans who were unlawfully detained over the course of an entire decade. Oh, and except for the victims of the other crimes Arpaio was charged with that somehow aren’t part of this main discussion, including (but not limited to): 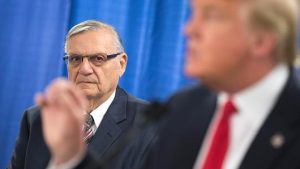 This is the subject of Trump’s first presidential pardon. And really, can you think of a worthier candidate?

But before you get all self-righteous and angry, please remember that Hillary Clinton used a PRIVATE SERVER to trade risotto recipes with John Podesta. My point is there is plenty of blame to go around.