Home  /  Advocacy • Healthcare • Politics  /  Marianne Williamson: You shouldn’t vote for her. But you should most certainly listen.

I’m not saying Marianne Williamson should be president, and I’m not saying some of her life’s work isn’t… well… a bit off the beaten path. And there are views that she has espoused in the past about both physical and mental illness that are not just offensive, but incredibly and insidiously dangerous. Nevertheless, as a disability advocate, it literally brought tears to my eyes that someone on a national debate stage finally said, and I quote: 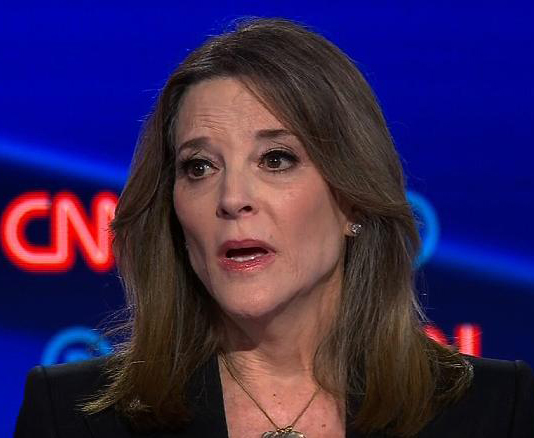 Marianne said something very similar in the first debate, too. And although I don’t always agree with her conclusions, I will say that she is incredibly consistent about looking to the root cause of our country’s problems, which is pretty important if you want to actually solve those problems, and not just treat the symptoms. I am not suggesting that you vote for her (mostly because she lacks experience and specificity, and her flaws are perfect fodder for Trump’s brand of attack), but I am suggesting that you listen to her and take her seriously when merited, because her wisdom on these and other issues is extremely astute and incredibly important.

And I hope the other candidates listen to her, too We can argue back and forth for another 50 years about how to pay for healthcare, but all plans will ultimately fail if we do not address why it is so expensive in the first place (Warren and Sanders speak very well to that, too), but also why *everyone* is so sick to begin with.

When my parents grew up, there were one or two people they knew with a chronic illness. Today, 1 in 2 adults have a chronic illness, and 1 in 4 children. And if you ask me, those numbers are extremely outdated and underestimated. Think of every single person you know well. How many can you think of without a chronic health condition of some kind?

For those of you who might think it’s because we can now make so many more diagnoses because the practice of medicine has gotten so much better, let me assure you that no, it has not (at least not when it comes to most chronic issues). The problem is in the food, guys. It’s in the water. It’s in the air. It’s in the various chemicals we use to keep things clean and theoretically sanitary. The problem is literally everywhere. The question is: what are we doing to do about it?