Over the years, I’ve been extremely lucky that I’ve gotten to meet a great many of my heroes. But for twelve years now, there’s one woman who has stayed at the very top of the list of people I wanted to meet: and finally, last Thursday night, I got my chance.

Despite her stadium-filling fame and success, Amy Lee (frontwoman and songwriter for the band Evanescence) is one of the most sincere, gracious, kind, and down-to-earth people (let alone celebrities) I have ever met. There was not one moment where I felt she was “phoning it in” as I told her what she and her music have meant to me over the years. Here was a snippet of our conversation:

Me: I know it may not look like it, but I actually have a pretty serious disability. And ever since I was 18, your music has been one of the only ways that I’ve been able to feel the pain in my own body, but also to be okay with it, and to feel a little less alone. So I just wanted to say thank you.
Amy: (tears in her eyes) Wow. Really? I – I don’t even know what to say. Can I just-
(She gives me a long, warm hug)
Amy: I’m so sorry you’re going through this. But I can’t tell you how grateful I feel that we’ve been able to help in any way. That’s really incredible. Thank you so much for saying that.

We then went on to talk a little shop (along with the rest of the band, who were equally friendly and engaged) about her music and my own show, Safe in Sound, which was inspired by her writing. I turned to go, trying to be respectful of their time, but before I could, Amy reached out to me and brought me in for another hug, resting her head on my shoulder brace, and letting me rest my head on her shoulder. For ten seconds that seemed like a peaceful eternity, she held onto me, and held the space alongside me. 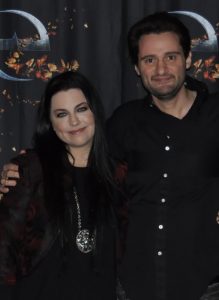 I know I’m just a stranger, and I’m sure I’m not the first stranger to tell her something like this. But in her words, in her eyes, and in her multiple hugs, I really got the sense that she cared. And it meant more to me than I can say. I will never forget that feeling of being not just hugged, but held, by someone I so deeply admire – someone who has changed my life, personally and artistically, in ways that she can only begin to be aware of.

And then I got to watch from eight feet away as this beautiful human transformed into a goddess the moment she walked onstage, and delivered a performance so heartbreakingly raw and honest that I was moved to tears again and again. Watching Amy sing is like watching someone in a trance – she is fully enveloped and invested in every note that comes out of her mouth, every word that comes out of her heart and soul. There is simply no one else like her.

Evanescence’s new album is called “Synthesis,” and while it contains a few new songs, mostly it is composed of her old gothic-rock classics re-imagined to include a live symphony orchestra. As a composer, listening to this album is like listening to my own process of writing a song – different instruments come in and out briefly in the form of ideas, a mild drum beat is established, until finally all the instruments come together as one and blow you out of your seat. I think that this is what Amy was going for, and the reason the album is called “Synthesis.” This album is an artistic representation of the process of writing the song as you go. It is a fantastic and beautiful achievement, and I am so grateful to have been one of the first people to hear it. The album comes out this Friday, and I can’t recommend it enough.

Amy, should you magically ever come across this post: thank you so much for a truly perfect night that I will keep with me for the rest of my life. And for my own fans out there (and Amy?? ;-), feel free to check out the page for my own musical Safe in Sound, which was first inspired by Evanescence’s music.